Buttercup has great admiration for Hank the Cowdog and seeks to emulate him – or even surpass him.

She has a great sidekick in Zookie. Actually, Tiger may be more of a sidekick than Zoo, since he is more the intrepid explorer type than she.

This is the same feather from another angle – I liked the little glints of sunlight off the soft, plumulaceous barbs. Plumulaceous barbs: the part that looks like down and does not stick together. 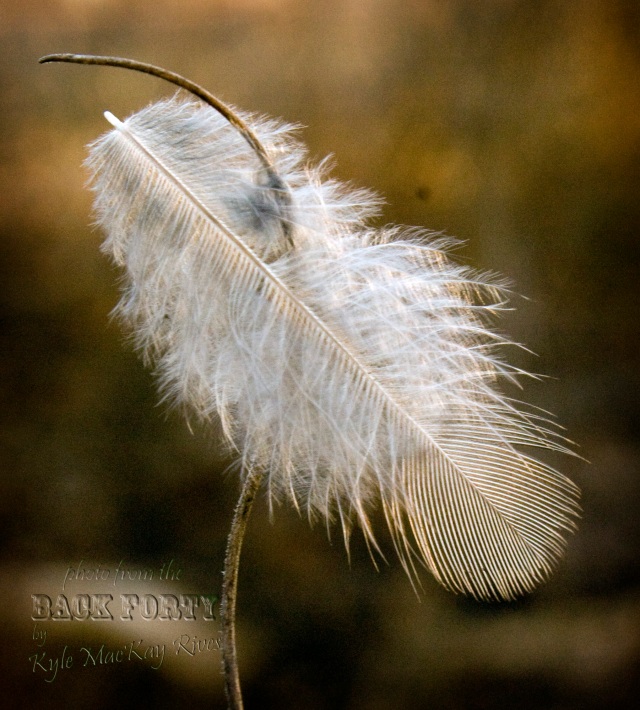 Swinging in the Wind - Small Weathervane

I was having trouble recalling that word, so I consulted The Feather Atlas, an online resource maintained by the US Fish and Wildlife service. Here is a link: http://www.lab.fws.gov/fa/glossary.php

She’s busy as a bee! I was out of town, out of state, actually, and had just a little downtime, so I took a stroll with my camera. It was that wonderful golden hour as the sun sinks to the horizon, and there she was with her sisters, busily trying to collect as much nectar as possible before curfew. Her bread baskets are full of pollen, too.

Just a soft, gray, bit of fluff, snagged by a random twig. Between our chickens and the myriad wild birds flocking here, these are not so very rare, but when the light catches them just so I find them fascinating. 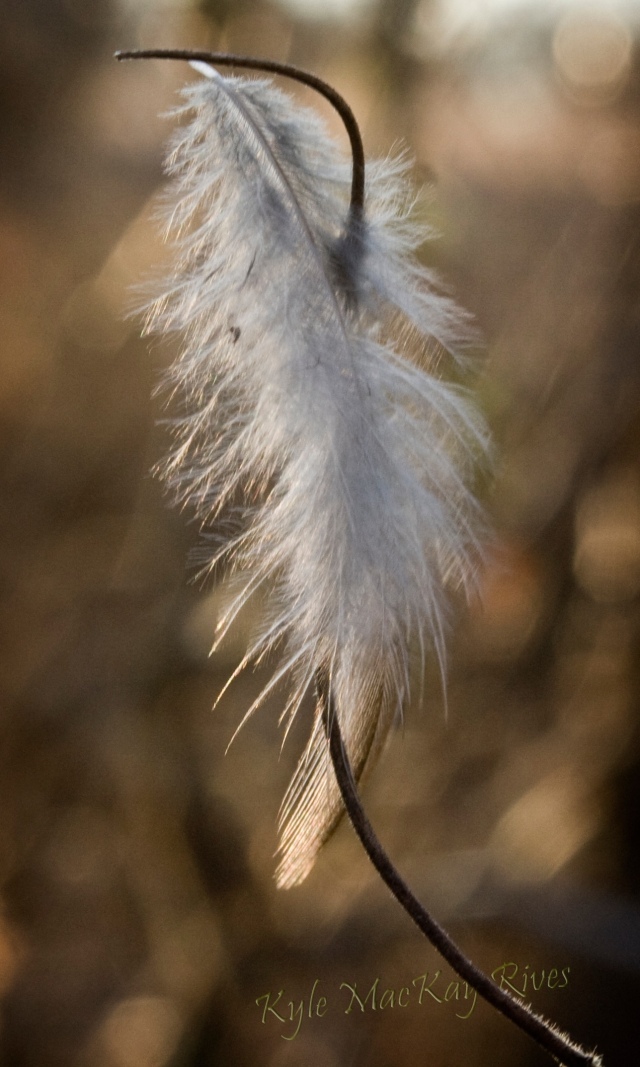 These little seed silks always grab my attention when they are glowing in the sunlight. Capturing it on film is more difficult than I expected, though.

Uno, Who Escaped with One Intact Tail Feather

Bridger’s Light Brahma hen, who earned the name Uno for sporting a single feather in her tail. Bridger thinks a coyote or a dog tried to grab her by the tail, but she escaped with just the single feather.

Here’s a flashback for you. So, there I sat on the pond bank, stalking the ever wary dragon fly and damsel fly (really, I am not picky, I’ll shoot whichever will light close enough and hold still long enough!), when I turned my head and spotted this guy on a leaf really close to my head. Moving slowly, so as not to scare it off (never had I seen anything resembling this critter), I turned and focused the camera. Voila! French is not my language, so ほら！すごい虫ですねえ。

Well, I just called it a prehistoric-looking bug, but my friend Travis did a Google Search and came up with the common name, scientific name, and an article about the beast. It turns out it is a “true bug,” something my Dad had tried to tell me about once – that there were insects that were truly bugs, and insects that were not – a member of the Assassin Bug family. And look there on its proboscis, a little assassinated insect from which it is presumably drinking the juices!

I was so excited to make a new (to me) discovery! And there were wheel bugs all around me, once I started looking. They are really quite a large insect, I don’t know how I never noticed them before. What an absorbing hour of shooting that was 🙂

Teal ducks? A blue heron? That large buck drinking? Something was here. It left as I climbed the pond bank, leaving only the widening ripples as evidence that it had been here. Soon they smoothed out and the pond was once again smooth as glass, reflecting the changing sky as the sun slowly rose.

Sunrise at the Pond on the Back Forty - Winter 2012

Tiger is a very companionable cat, accompanying me on many a photo shoot no matter the weather. He claims to be the true photographer’s assistant, not Buttercup.

Tiger is sure you have noticed that he is also infinitely more photogenic than a mere brindle dog, although he acknowledges that it is occasionally necessary to shoot her, too, if only to assure her protection from coyotes and other dangers. He does consider Buttercup a friend. A useful, large friend. Just not quite as good a photographer’s model as a green-eyed tiger cat.

This thistle plant has attracted my attention all year long, since early spring. I have been fascinated by the textures and shapes… But I have to admit I do not want lots of little, new thistles to spring up all around it next spring! 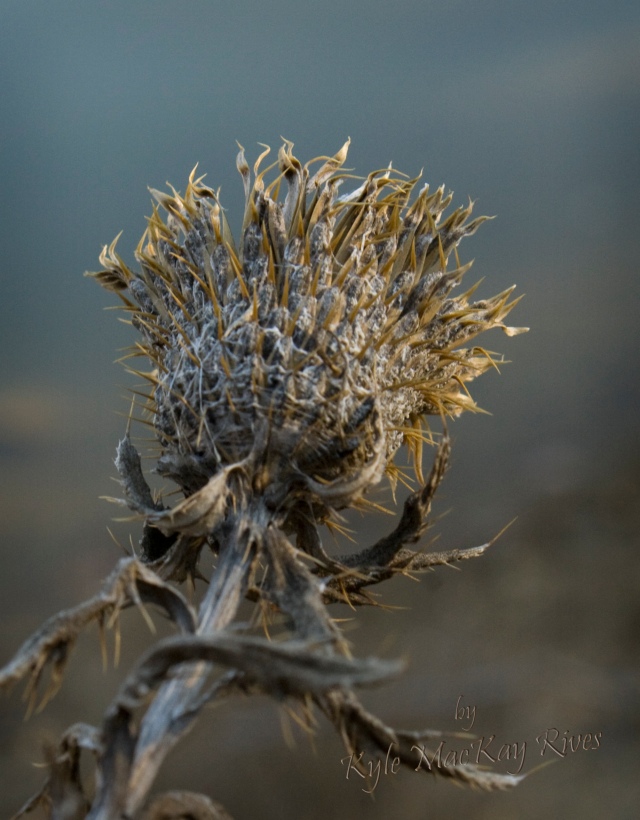 January Thorns, or The Thistle at the Pond