Let’s flashback to another warm and lazy day in September of 2013. The dragonflies were circling the pond, landing in their favorite spots, then circling the pond again, for all the world like teenagers cruising downtown in their cars. 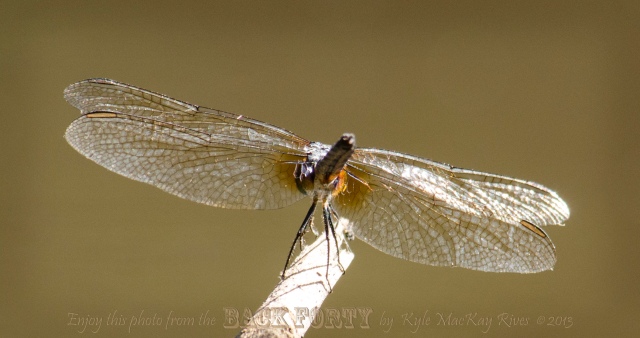 Now for a flashback to a warmer time. I know we are not the coldest part of the country here in OK, but it was -4 degrees F this morning!

I loved the texture and the color in this shot of the pond, taken last September, when the temperature was well above freezing.

About to strike the ball.  He loves the “beautiful game!”  So I love taking photos of him playing it 🙂

Powdered with gold dust, she glows in the sunlight. 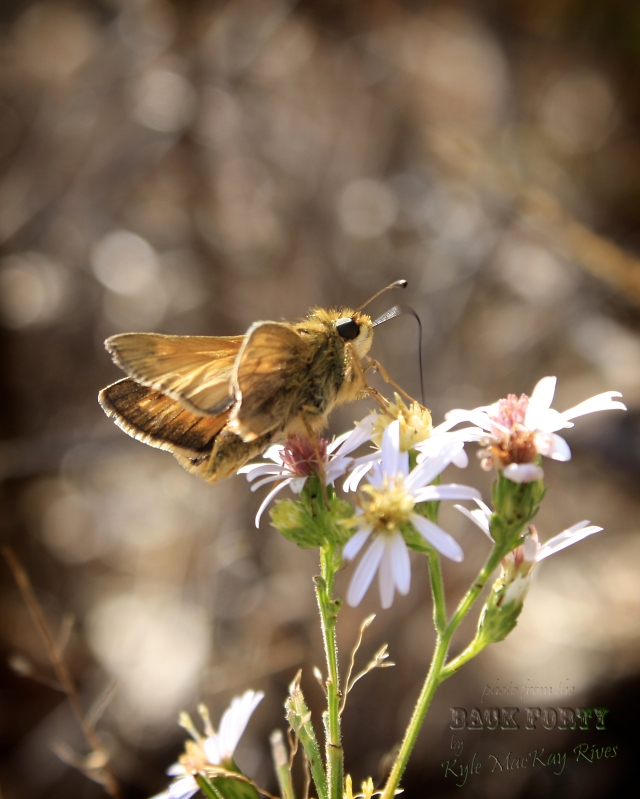 Velvety Golden All Over - Summer 2011

Doesn’t she look soft? Don’t touch her, though, or you’re liable to rub that dust right off and leave her damaged and unable to fly as well as before.

He is nearly invisible, despite his glowing green color.

He just looks like a part of the plant on which he is resting.

It is like meditating. I go out to take photos – usually drawn out by the beckoning sunlight, sometimes driven out by a need to create something – I first take a few shots and restlessly move on. Then it captures my attention –  it varies – and my attention becomes focused on it, I change angles, or slowly move closer, or think of the angle of the light or how the background contrasts with it. Sometimes those photos turn out as I imagine them, but often, in the quiet of truly focusing, I become aware of something else that I had not seen – would not have seen at my earlier pace – and that becomes the real photo shoot of the day. This little insect was one of those, in the summer of 2011. I didn’t see him until I was focusing on a dragonfly, what I thought was it, trying to ease closer and get a shot with all the elements right, background, the glint of light on its wings, the… Oh no, the dragonfly flew away! Then I saw the bright yellow flowers on their glowing green stems – and it. When I came out of the trance and went back to my computer to look at what I got, I was pleased with this shot 🙂

Does anyone else find themselves out of the everyday hustle and bustle, almost meditating while pursuing the shot?

A small, red beetle crawled up an apple leaf. At the edge, what should he do?

What would you do, were you a small, red bug? Fly off into the wild green yonder? Travel around the edge of the leaf? Cross over to the other side of the leaf?

Multitudes of small, silvery butterflies flutter around these flowers on warm summer days.

Until looking at the still images, I was unaware of their secret beauties. The delicate, black and white striped antennae tipped in golden yellow is the most striking hidden feature. I also love their furry little faces and the false eye and face at the other end that might serve to trick predators into attacking a less vulnerable part of their anatomy, hopefully giving them a chance to escape.

I have always loved being out in nature, but the camera both gives me “permission” to spend more time outdoors and also reveals so many lovely little secrets that I couldn’t (or didn’t) spot with my own, “normal” vision. I hope I am becoming more observant and also winning my lifelong fight to grant value to the artistic side of my personality, rather than dismissing it as unuseful or not worthwhile.

Does she have an itchy foot? 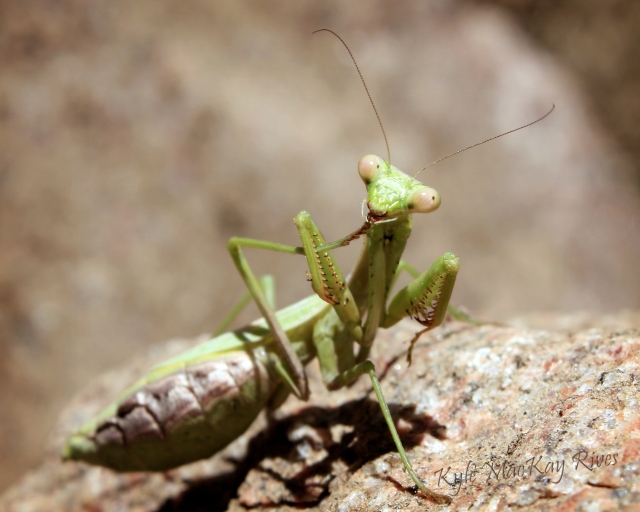 This was another insect Bridger spotted. He ran in, “Mom! I think you will want to take a photo of this praying mantis out here!” I grabbed my camera and hurried after him.

When I got there and started shooting, this praying mantis turned out to be a natural model, striking several interesting poses in quick succession. This was my favorite, though, chewing on her foot, because it made me think of my dogs and horses 🙂

This was when I was new enough to my camera that I was having a hard time with some focus and depth of field issues, but you can see most of her pretty well.

Bridger was excited to spot this very large caterpillar one morning in September of 2010. He thought I might like to make its portrait. He was right!

I don’t know what caterpillars contemplate in general, but this one was trying to start to spin its cocoon. Talk about an opportunity for deep contemplation, the time spent metamorphosing, wrapped in a cocoon, might just be time for deep coming-of-age thoughts!

Should we take a cue from the moth and butterfly world, and tightly wrap our teenagers in swaddling clothes to contemplate their coming of age years?

Zooming in on the gold, sunset-lit filaments of this grass seed head, I saw an anomaly.

A fat filament? No, it moved. Although it was well camouflaged, it definitely had legs and eyes. I don’t know what it is, but several of the same variety of grass sported similar denizens. Do you know what it is?